The UK Pollinator Monitoring Scheme (PoMS) was established in 2017-18, and during its first four years PoMS participants generated 3,355 Flower-Insect Timed Counts from at least 500 unique site locations across the UK, representing nearly 560 hours of survey time and including a total of 35,813 insects! In addition, a total of 596 survey visits were conducted across the 75 PoMS 1 km squares, with trained volunteers setting out pan traps in two thirds of this extensive national site network.

By the end of the 2020 survey season, the number of recorded bee and hoverfly species from the pan traps had reached 216. As well as gaining valuable insights into the changes in species richness and abundance of key pollinator groups between years, PoMS surveys have also extended the known ranges of some less well-recorded species. We are incredibly grateful to everyone who has given their support and enthusiasm to the scheme, from the core team of partners and funders to the hundreds of volunteers submitting data, the taxonomists behind the scenes and landowners allowing access for the 1 km surveys. Thank you all!

In early 2021 PoMS launched a new website, along with an app dedicated to the ten-minute Flower-Insect Timed Count surveys (FIT Counts). The app has proved very popular and enabled a significant boost in numbers of submitted counts during 2021. Hopefully this pattern will continue in 2022 and beyond, helping us get better evidence of changes in the numbers of insects that visit flowers and contribute to pollination services. 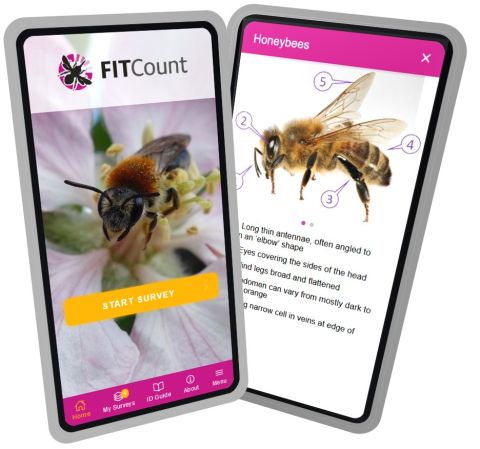 The FIT Count methodology and app is also being taken up more widely around the world. UK PoMS is working with countries across the European Union and South America to enable further monitoring of pollinators on a global scale.

Back in the UK our volunteers are busy carrying out pan-trap surveys in a defined set of 1 km squares across the UK. There are still a few squares available for volunteers to adopt, see the website for a map and more information. And please do continue to send in the results from your FIT Counts, which can be carried out at any location that has suitable flowers, in good weather between April and September.