A new atlas of British and Irish bryophytes is published this month. Bryophytes is the collective term for mosses, hornworts and liverworts, spore-producing, rather than seed-producing, plants without flowers. The British Isles support a rich and geographically diverse flora of bryophytes with more than 1000 native species (four hornworts, 298 liverworts and 767 mosses) currently known. Fifty-nine new species have been discovered in the last 20 years.

The maps in the atlas reveal dramatic changes in the distribution of some species since 1990. The most striking change has been the increase of many species which grow on the bark of trees, a response to cleaner air following reductions in sulphur dioxide pollution in recent decades. Many species, such as the moss Cryphaea heteromalla (pictured) and the liverwort Frullania dilatata, have spread from the relatively unpolluted areas and now occur throughout Britain and Ireland.

The British Bryological Society and the Biological Records Centre started recording bryophyte occurrences in 1960 and some 1069 species are mapped in the new, two-volume publication. It replaces an earlier, three-volume atlas (1991–94), updating it with the results of two decades of further fieldwork. The number of records on which the maps are based has increased from a total of 770,000 in 1994 to 2.83 million in 2014. Records have been contributed largely by amateur recorders – 404 recorders contributed 97% of the records and of these a ‘hard core’ of 45 recorders each contributed more than 10,000 records. 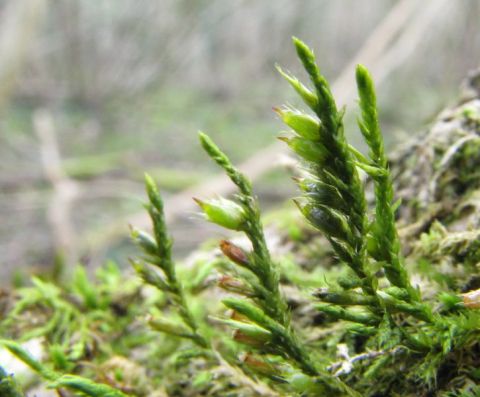