It's been a while since our last update and as usual there has been lots of recording scheme activity taking place. Here are some examples of new schemes and new projects since 2020. Thanks to the many volunteers who organise and contribute to recording schemes.

This is one of the four recording schemes under the umbrella of the British Myriapod and Isopod Group, and has been reinstated in 2020 following a brief period of activity in the 1970s. Warren Maguire leads the new scheme, and has provided information about the scheme and the species it covers on the BMIG website.

Marine isopods are extremely under-recorded, so anyone submitting records will be contributing towards our understanding of the distribution and habitat preferences of these fascinating organisms. All records, even those for common species or those that don’t add new ‘dots’ to the maps, are valuable. They can be added to iRecord or sent direct to the scheme. 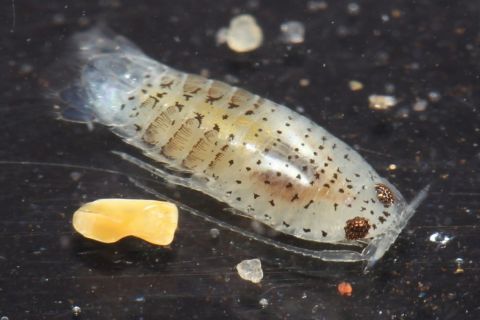 There are new scheme organisers in place for the Rove Beetle (Staphylinidae) Recording Scheme: Don Stenhouse and Alison Thornhill have taken this on, building on the work of the late Peter Hammond. Initially they are focusing on processing the backlog of around 15,000 records on iRecord. Don and Alison hope to encourage recorders to send in enough detail and supporting evidence to enable records to be veriifed for this group of beetles that are often considered to be a challenge for identification. Photos can be very helpful for some species, while specimens and dissections may be needed to confirm others. Where recorders have examined specimens in detail it's helpful to add comments explaining how the identification has been arrived at, e.g. stating whether or not the specimen was checked under a microscope and which keys were used.

No doubt a number of other recording schemes would make the same plea for records to be sufficiently detailed to enable a safe verification decision to be made, and this is something that BRC is keen to support.

This new scheme was set up by Liam Olds in early 2021 to focus on the recording and conservation of oil beetles. This family of beetles contains just eleven species, which are parasitoids of other insects groups, mostly bees. The beetles are associated with high quality habitats that support healthy populations of wild bees, and are an important part of the species diversity that is linked to the ecology of plants and pollinators. Three species are considered extinct in the UK, and some others are declining, and records (via iRecord or direct to the scheme) are needed to monitor what is happening. More information and an ID guide is available from the scheme page on the UK Beetle Recording website.

This new study group has been set up as part of DIpterists Forum to focus on the lesser dung fly family. This is a fairly large family of 141 currently recognised UK species, but has been rather neglected in the past due to challenges around the identification and taxonomy. The new group aims to bring together information and make these flies more accessible for wider study. More information is available from organisers Andrew Cunningham and Mark Welch via the group's page on the Dipterists Forum website.

Launched in 2020, the Kelp Fly recording scheme covers a small group of five UK species in three families. All are associated with shoreline habitats and can be found on rotting piles of seaweed anywhere around the coastline of the Britain and Ireland. The scheme page on the Dipterists Forum website has further info from organiser Donald Smith, and some links to identification resources. Records are collated via iRecord and shared with NBN Atlas.

Considerable progress has been made over the last couple of years to bring together available records for the Sawfly Recording Scheme, building on the work started by Guy Knight, who has been joined by Andrew Green and a team of additional recorders and verifiers. A new website provides a great set of resources and species accounts, and records are being collated via iRecord and shared with the NBN Atlas. For links and further details see the scheme page on the BRC website. 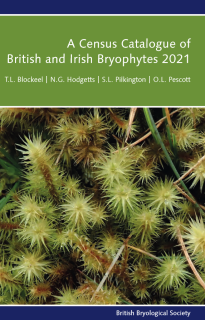 There have been over 92,000 records of bryophytes submitted to the BBS database in the past two years. Last year saw the publication of A Census Catalogue of British and Irish Bryophytes 2021 (Blockeel et al., 2021), which details the known distribution of all our bryophytes by Watsonian Vice-County.

Two new beetle atlases have been published by BRC via the Field Studies Council since our last newsletter, each packed with information on the natural history and distribution of the species groups they cover.

The third in the series of water beetle atlases covers 85 of the smaller species, including the minute moss beetles and the variegated mud-loving beetles. Although small, many of these species are indicators of habitat quality and all have their own fascinating natural histories.

This book contains not only atlas maps and species account but also a beautifully illustrated set of identification keys, making it a key work for the continued study and recording of clown beetles and carrion beetles. Many of the beetles in this group play important roles as predators in dung or decomposing fungi and carrion. The group includes some large and charismatic beetles, some of which regularly turn up in light traps.

Two further BRC atlases are in the late stages of preparation, and these will cover centipedes (by Tony Barber) and click beetles (by Howard Mendel). Watch this space for news!

BRC has also worked with the Mammal Society to support the recent mammal atlas and a subsequent paper on long-term trends:

The British Dragonfly Society has published a (beautifully illustrated) review of the conservation status of the UK species, in partnership with UKCEH/BRC:

Conservation status reviews for a number of other species groups are in progress and BRC has worked with a number of recording schemes to ensure that relevant data is made available to the review process. Most recently this has included work on ladybirds and sawflies. For an update of status reviews see the JNCC website.

Data management and use

A huge amount of biological recording data is shared by the recording schemes and BRC, including via regular uploads to the NBN Atlas and by the schemes themselves. BRC works with the schemes to support this process, and to carry out analysis of the data to provide information on species trends and indicators, and how these relate to ther environmental change. Recent and ongoing work includes: