The numbers of records being submitted via iRecord and the other sites that share the same data warehouse continues to increase, as does the number of verifications being carried out, records incorporated into recording scheme datasets and shared via the NBN Atlas. A very big thank you to everyone who has contributed records and verifications.

The increasing number of records is welcome and improves our knowledge of changes in species distributions, but also means an increasing workload in terms of verification. Various options exist or are being investigated to support the verification process, many of which were discussed at the BRC recording scheme meeting last March. These include: how to share verification among teams; how ‘record-cleaner’ rules can be used to automate parts of the process; what role there might be for image recognition.

The verifiers on iRecord are nearly all volunteers associated with the national recording schemes, sometimes working through a network of county recorders. There are still some gaps in the verification process for particular species or areas, but the total number of records being reviewed is very impressive, and alongside the verification process itself verifers frequently provide feedback and mentoring to the recorders concerned - thanks again to all who play a verification role.

A new iRecord user guide is available, providing comprehensive information about how to use the various features of iRecord. This has been compiled by Steve Garland, updating and extending a document first produced several years ago.

The new guide was developed for the Tanyptera Trust who are supporting invertebrate recording in north-west England, based at National Museums Liverpool. We are very grateful to Steve for making the new guide available.

iRecord is supported by a small team of developers within Centre for Ecology & Hydrology (CEH) and externally. Resources are of course limited, but there is continuous work to maintain the existing infrastructure and provide enhancements where possible. Recent work has included:
•    Background work on performance – we’re aware that iRecord can run slowly at times.  Performance is constantly under review and important improvements have been made to keep up with the increasing demand, including a recent move to a new server.
•    Work is under way for new reporting tools based on “elasticsearch” technology. This promises to greatly increase the performance of various reports on iRecord.
•    Changes to mapping: Google has recently changed the way that it charges for map use, and we’ve had to implement changes in the map layers and place name searches we use on iRecord to avoid costs getting out of hand.
•    And as usual there have been a variety of new projects making use of the iRecord tools to bring species data together in one place for recording schemes and local environmental records centres to access it, as well as building systems for other types of environmental data. Recent project work has included the CEH National Honey Monitoring Scheme, data-sharing functions for the National Trust, updates to the Pantheon invertebrate habitat system, plus work on new sites including for Sheffield and Rotherham Wildlife Trust and the European Butterfly Monitoring project (ABLE).

Map boundary updates
We've recently completed some work on location boundaries to fix a number of problems. This has included:
•    Undertaking a general review of vice-county (VC boundaries), chiefly adding missing islands including many around the Outer Hebrides, Ailsa Craig and Lady Island in Ayrshire, Grassholm and The Smalls in Pembrokeshire and the Scilly Isle for Cornwall. BRC has taken on  the ongoing maintenance of the VC layers originally compiled by the NBN Trust, via an open source repository.
•    Updating the Local Environmental Records Centres boundaries, in conjunction with ALERC, to pick up on recent changes to LERC operations.
•    Updating the Butterfly Conservation local branch boundaries.
•    Adding a 3 nautical mile seaward extension to Eire and NI and country boundaries to be consistent with the GB countries.

Sharing data with the NBN Atlas
Recording schemes and projects that make use of iRecord can choose to send their data direct from iRecord to the National Biodiversity Network (NBN) Atlas. We can now supply updates to the NBN Atlas on a regular (usually monthly) basis using an automated export process.

A number of schemes have opted to use this facility, and to date over 800,000 records have been shared directly from iRecord to the NBN Atlas.

Not all recording schemes and projects choose to send data direct to the NBN Atlas from iRecord, as some prefer to manage iRecord data via their own databases, sharing data from there to the NBN Atlas.

This article was published in the BRC Newsletter September 2019 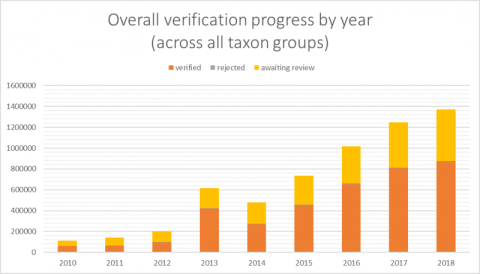 Records added and verified via iRecord