The Millennium Ecosystem Assessment highlighted invasive non-native species (INNS) as one of the main drivers of biodiversity loss.  INNS cost the British and European economies an estimated £1.7 billion and €12 billion, respectively, each year. INNS are being introduced into Europe at unprecedented rates and are best controlled through prevention, early detection and rapid response. BRC has developed integrated warning systems, leading the development of national and European-wide databases providing information on >12,000 INNS coupled with detailed research on the ecology of INNS.

Information systems contribute to understanding and management of INNS. The DAISIE database identified over 12,000 NNS within Europe, while the GB-NNSIP covers over 2,000 non-native species.  The GB-NNSIP early warning and rapid response system was key to the Environment Agency’s early identification of the newly arrived shrimp Dikerogammerus haemobaphes.  BRC has recently co-ordinated experts from the volunteer recording community in an horizon scanning review to predict INNS not yet established in Great Britain that are likely to impact on native biodiversity. 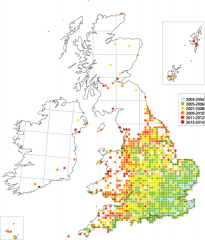 Over 50,000 people contributed harlequin ladybird records to the UK Ladybird Survey, helping to improve understanding of its ecology.

Number of established non-native species in the UK: an upward trend 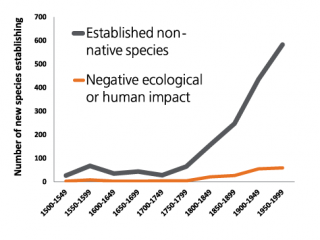 There has been a dramatic increase in the number of species becoming established in the UK over the last 400 years and there is no indication of this trend slowing.  The number of established non-native species designated as having a negative ecological or human impact is also increasing. 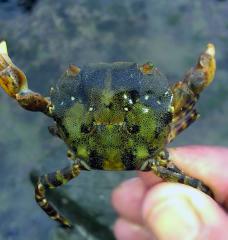 Quagga mussel, Dreissena rostriformis bugensis, received maximum scores for risk of arrival, establishment and impact on biodiversity in an horizon scanning workshop involving volunteer experts from the recording community. The Asian shore crab, Hemigrapsus sanguineus, is another species ranked in the top ten list of species most likely to threaten biodiversity in Great Britain in the next 10 years. The first record of this crab was received one year after the workshop predicted its arrival.

Collaboration is critical for responding to INNS. BRC is leading a European network 'Towards a European information platform for alien species' which is facilitating collaboration between experts across the continent.  The project aims to harmonise NNS databases and explore undiscovered sources of information. Such work is integral to the implementation of post-2010 EU Biodiversity Strategy.  Within GB, BRC is supporting the rapid flow of INNS information from recorders to the GB-NNSIP and NBN Gateway to underpin effective decision-making.