Despite huge improvements in air quality in recent decades, research consistently indicates that nitrogenous pollutants from agriculture, industry and transport are continuing to cause declines in plant species richness across a variety of semi-natural habitats. Ongoing monitoring across all groups of species will continue to provide evidence for increases and declines associated with anthropogenic pollution; evidence from across taxa can strengthen conclusions regarding large scale changes, particularly where multiple environmental drivers are acting in concert.

Links with the Botanical Society of Britain and Ireland and the British Bryological Society have provided data and new analytical approaches to investigate drivers of environmental change, such as anthropogenic air pollution. Key publications, such as Atlases of species' distribution, have all contributed to our understanding of these drivers in the UK and Ireland, and have produced data sets that are allowing researchers around the world to address novel hypotheses.

The ongoing contribution of lichenologists to air quality research 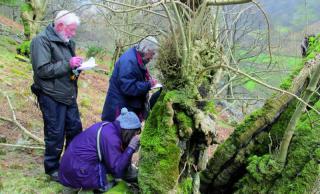 The sensitivity of lichens to various types of pollution was first noted by observers in the early years of the Industrial Revolution. The calibrated sulphur dioxide scales of the 1960s and 70s have now been supplemented with similar assessment tools for nitrogen enrichment. 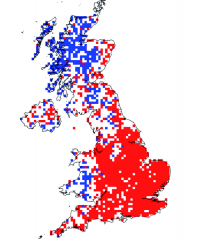 In the red 10km squares, those vascular plant species which have not been recorded since 1987 are characteristic of less fertile habitats, whereas the plants which are still present tend to thrive on more fertile substrates. This demonstrates that the loss of nutrientpoor sites, for example, by habitat destruction and eutrophication, has been the main driver of change in plant diversity across much of the UK. By contrast, in the blue 10km squares, lost species are characteristic of more fertile habitats. This more surprising result reflects the loss of species associated with arable land in areas where agriculture is now almost exclusively pastoral.

The clearest signal of change in the British bryophyte flora over the last 50 years has been the recovery of sulphur dioxide-sensitive epiphytes and the corresponding decline in acidophiles. The
‘heat’ maps show how the number of epiphytes (for 28 selected species) per 10km grid cell increased significantly between the two time periods.

Changing the ways in which the monitoring of species takes place may allow for even more confidence to be placed on the results of analyses.  More systematic approaches to recording, for example via the National Plant Monitoring Scheme, will create opportunities for finer-scale analyses of pollution-driven changes in species’ distributions and abundances. Novel citizen science initiatives, driven by technological innovations such as personal pollution sensors, could enable more direct analysis of pollutants linked to species occurrence at a local scale.