Habitat presence and quality is a controlling factor in the distribution and abundance of species. Widespread post-war habitat destruction led to a decline in many species and was a driver for the BRC’s establishment. Now, changes to habitats are often more subtle, brought about by factors such as fluctuating grazing pressure, eutrophication or changing climate. The recording schemes are essential in documenting the effect of these changes and in understanding the habitat requirements of species.

The publication of atlases provides the opportunity to analyse long-term changes in range in response to habitat changes and other variables. Codification of attributes, as in PLANTATT147 and BRYOATT148, allows species to be linked to their habitats, an important approach being extended to other species groups. Changes in popular groups with rapidly changing ranges, such as butterflies, are summarised every five years. Records in the BRC database are available for analysis in between major, ‘state of the nation’ reports. 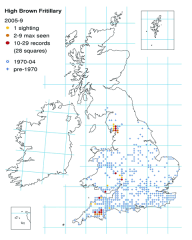 The High Brown Fritillary (Argynnis adippe) requires warm microhabitats where the larval foodplants, various species of violet, occur with bracken; they include south-facing rocky slopes, coppice woodlands or woodland clearings. Its decline mirrors the loss of coppiced woodland and bracken/grassland mosaics with low intensity grazing by cattle or ponies. 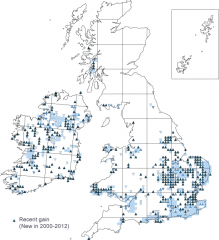 As shown by the atlas published in 2014, the distribution of the Hairy Dragonfly (Brachytron pratense) was mainly coastal in Britain until recent years when it has colonised a number of inland gravel pits that were excavated in the 1960s and have acquired a mature vegetation cover. It may also have benefited from the more favourable climate in recent decades. 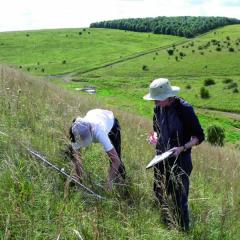 The National Plant Monitoring Scheme was designed and developed my UKCEH, BSBI, Plantlife and JNCC.

The Scheme aims to fill a gap in terrestrial habitat monitoring by focusing on the abundance of plant species within plots for a range of vegetation types. This should enable changes in plant diversity to be detected earlier than is possible with traditional biological recording conducted at broader scales.