Biological records represent an essential resource to document and understand the impacts of climate change on biodiversity. High quality data has enabled the UK to be at the forefront of climate change research. Internationally important publications have also been produced directly from the data provided by volunteer schemes and societies.  Current projects using biological recording data include assessing the risks and opportunities faced by individual species during climatic changes and identifying refugia which may help promote the persistence of species.

Analyses of distribution data provided some of the first demonstrations of the impacts of climate change on biodiversity. Climate warming has caused many species to shift their distributions, with their responses often influenced by land use changes.  Biological recording has been invaluable in understanding these interacting effects, predicting the risks and opportunities faced by species from climate change and identifying appropriate ‘adaptation actions’ to reduce undesired climate change impacts. 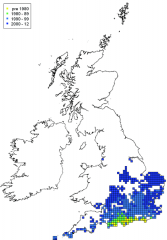 Historical and recent biological records allow us to document changes in species’ distributions, many which are driven by changes in climatic suitability. 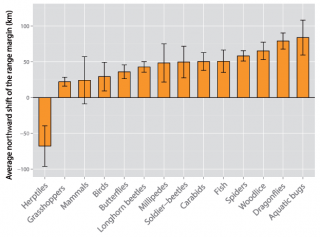 Based on distribution data from 1960-2002, most animal groups have shown an average northward shift in their British range margin, albeit with substantial variation within groups. Bars show results for hectads where 10% of the species in a group were recorded in both time periods; similar results were obtained with other cut-off values.

A challenge is to explain the different responses of species with similar initial ranges to climate change.  We continue to improve models to predict future changes, taking into account species ecology and patterns of recording. The substantial effort of volunteers in providing the geographic and taxonomic coverage of biological records is invaluable to increasing our understanding of the impacts of climate change. Ultimately, the development of robust evidence-based adaptation and conservation strategies is highly reliant on this unique data resource.