The Biological Records Centre (BRC) and BugLife held a freshwater biological recorders workshop on the 9th October at CEH Lancaster. The workshop was attended by representatives of the freshwater recording community including volunteer recording scheme organisers, NGOs working to support recording of freshwater species and habitats, local records centres and ALERC.

The overarching aims of the workshop were to:

The programme for the day is here. Professor Helen Roy, Head of Zoology at BRC and Craig Macadam from BugLife welcomed all participants and this was followed by a series of short talks including perspectives on the importance of freshwater habitats for some Soldier flies, with a call to recorders to send records to Martin Harvey (Soldierfly recording scheme organiser). Ian Wallace then gave an overview on Riverflies, their status reviews and how to increase recording. As always, it was inspiring to hear the breadth of the outreach from the Riverfly recording schemes. Garth Foster introduced the two new Water Beetle Atlases and gave entertaining fascinating talk on water beetles. Naomi Ewald then highlighted the impressive dataset from PondNet. David Earl finished the short morning talks with a beautiful presentation on Lancashire’s aquatic plants.

Helen gave an update on activity from BRC. There was a lot of interest in the ‘What’s Flying Tonight?’ app that Helen presented as a possible method for recording other taxa such as those relevant to freshwater habitats. Charlie Bell provided a fantastic summary of the way Biolinks is being developed to help fill in gaps in expertise in taxonomic skills. Everyone agreed there were many opportunities for getting involved at many levels of expertise. Following on with the theme of training, Gary Hedges then demonstrated the excellent opportunities within the North West Invertebrate project, run by the Tanyptera Trust. Richard Chadd updated the audience on activities from Freshwater Biological Association and the Environment Agency perspectives.

Phil Taylor (CEH) gave the final talk of the day introducing Hydroscape, an exciting large-scale project bringing together freshwater datasets. He also gave an overview of the Bloomin algae app. In the afternoon we had some very lively debates around the two focus topics of how to make freshwater recording more sustainable and how to encourage wider use of freshwater data. These workshops were brilliantly led by CEH’s Martin Harvey and Tom Hunt from ALERC. The outcome of the workshops will be written up separately and published later in the year. It was an extremely enjoyable and informative day. There is so much going on across the freshwater recording community and everyone agreed that there has been considerable advances in recording freshwater species and habitats. Innovations and engagement approaches are providing many opportunities to increase recording activity and enhance data flow.

Links to the workshop presentations can be found in the 'Files' section of this page, below the image of Gary Hedges introducing the North West Invertebrate Project.

If you want to know more about the workshops, please contact Jodey Peyton (joyt@ceh.ac..uk). 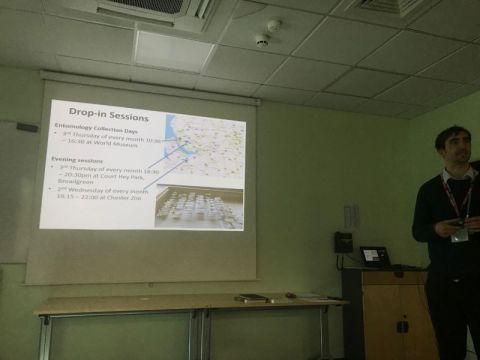